skip to main | skip to sidebar

SWAP Is Wrapping Up

I stopped posting about my SWAP in March to spend all my free time sewing with hopes of finishing.  At one point the light at the end of the tunnel was visible by first changing option 2 (two dresses) for option 1 (tops and bottoms) and being allowed to use 3 pre-sewn or purchased items.
I've had these two skirts hanging in my closet for too many years. They're are both made from a soft double knit fabric. 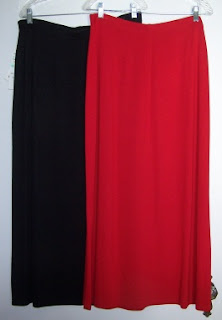 The problem with them was that they were too long (at my ankle) and too tight in the waist.  If I altered them at the waist instead of the hem, I could make them wearable.  I started the alteration of the black skirt by marking 10 inches from the top and cutting the fabric away. 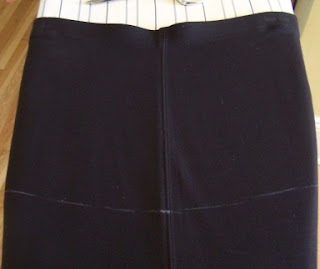 As a result, the waist became too large, so I tapered the side seams from the hem to the waist using my serger.  The original waistband was treated in an interesting way. 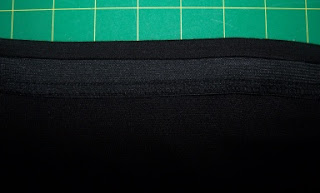 I was excited about reproducing it, but realized that if I ever wanted to take the waist in or out, it would become quite a process, so I went with serging the raw edge and encasing the 1 inch elastic.  Here's a before and after photo. 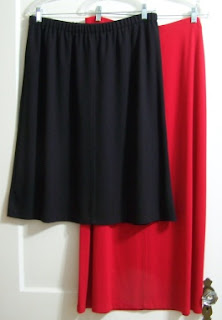 I repeated the same process for the red skirt, except I made the length a bit longer. 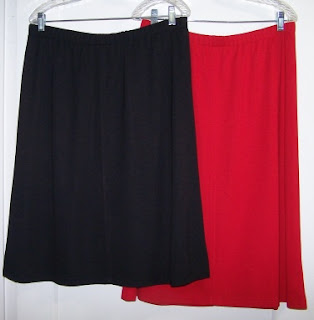 At this point I had three completed skirts, two knit sleeveless tops, and one pair of slacks partially completed.

My next project was the KWIK SEW 3494 blouse made of silk.  I avoid knots on silk as much as possible.  A knot wears away at the fabric.  This is how I work my darts. 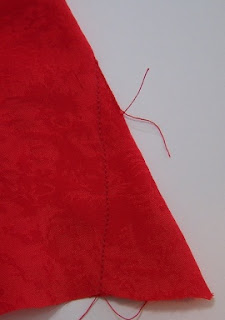 My secret for working with silk is to use lots of pins.  I enclosed some of the seams with french seams. 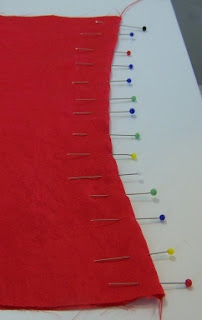 Truthfully, this is my favorite piece.  It's soft and comfortable.  The hem looks crooked, but it is just the way it hangs on the hanger. 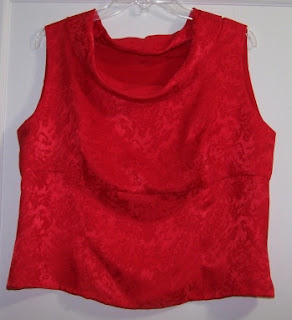 ﻿At this point I picked up my McCall's 7883 gold charmeuse blouse to finish it up and also cut out a black charmeuse blouse using the same pattern but with a different neckline.  The black blouse went together quickly, because I had already dealt with the fitting issues.  I had enough gold fabric to cut out a silk camisole to wear under my knit tops.  I purchased a black camisole for my final piece.  Now, I had exactly one week before the end of April.  I convinced myself that I could make the deadline.  This was when the light began to fade.
For some crazy reason, the sleeves of the two blouses were shorter at the bottom front edge than at the bottom inside edge.   I had enough fabric to recut the sleeves, but I needed to think about the problem in order to solve it. 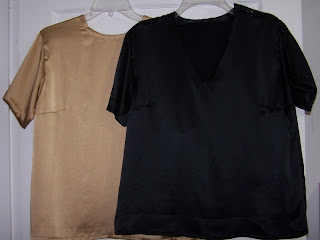 I also had to redo the neck top stitching, because they were puckering.  They also needed button and buttonholes.

I only had the straps of the cami to turn right side out and attach. 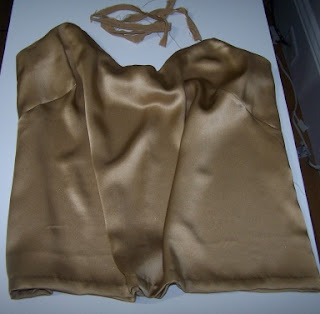 The bottom line is that I didn't make the deadline.  Two people did, and congratulations to them.  You have to be dedicated and commited to finish, and they were.  Be proud!
Posted by Suit Yourself Couture at 10:51 PM 2 comments: Links to this post

Suit Yourself Couture
Continually searching to improve my sewing/tailoring skills.

Sew Your Own Wardrobe For A Year Challenge 2015