skip to main | skip to sidebar

My DH is very supportive of my sewing passion.  He was an airplane mechanic during his early years in the Air Force and learned how to repair (sew using a flat felled seam) a cloth plane wing.  He actually took a sewing class two years ago on tie making, made a tie, and received lots of compliments on it .  Last year he traded up an old Brother's sewing machine he purchased at a yard sale for a Bernina.  This spring we were going to each make a shirt with me teaching him the process.  I recently discovered that Peter was having a shirt sew-along, and I encouraged my DH to join.   I checked off the list of suggested sewing tools and added a few of my own. 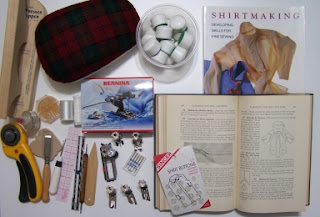 In May, 2010, while honeymooning  in NYC , we purchased a few pieces of shirting fabric to prepare for our shirtmaking sessions; 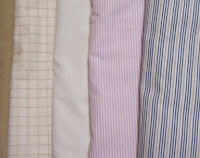 The two pieces on the left would make a fine two-toned shirt.  While sewing a shirt for my DS, I purchased while muslin for interfacing and later purchased white fusible interfacing.  Of course, I have loads of shirt buttons.
The only new purchase is the Nigroni shirt pattern from Colette, which I took care of today; but that isn't a firm pattern decision from my husband.  He would like to make more of a dress shirt, so he probably won't use it.  However, I may in the future.  Watch his progress on MPB Men's Shirt Sew Along under Pago_3 and I will also be posting his progress here.
Posted by Suit Yourself Couture at 12:02 PM No comments:

Suit Yourself Couture
Continually searching to improve my sewing/tailoring skills.

Sew Your Own Wardrobe For A Year Challenge 2015